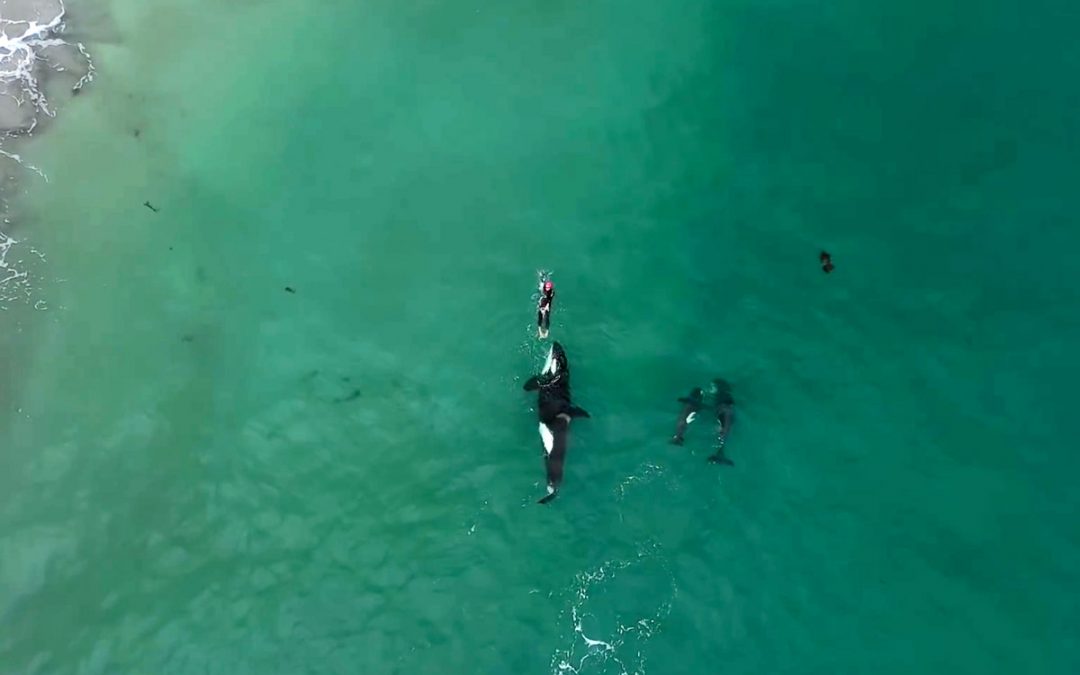 This is simply amazing. On December 4, 2018, photographer and filmmaker Dylan Bradshaw was watching a pod of wild orcas swimming off Hahei Beach on the Coromandel Peninsula, New Zealand. The weather was a bit cold, but he noticed a swimmer in the water. With growing concern, he watched the adult and two juvenile orcas head toward the swimmer. His initial attempts to warn the swimmer, Judie Johnson, were unsuccessful. With nothing else that he could do, he put a drone in the air. The footage that he caught is astonishing.

The swimmer, Judie Johnson, later talked about the experience that day. “There was a shape that went under me, like a huge shape, and I thought [it was] dolphins and I was quite excited. And then I saw the great white colour on the back.” Her wonder turned into momentary concern. “I was also thinking they eat seals, and I’m in a black wetsuit,” she said. Despite that, she didn’t feel like she was in real danger and, after a brief rest on the beach, she went back out into the water to finish her training swim.

Orcas are well known to be the top predator in the wild ocean. They will hunt and kill great white sharks. However, orcas are also known to be highly intelligent, social, and curious animals, and attacks on humans in the wild have been extremely rare. This footage of a swimmer with orcas in the Norwegian Sea illustrates that fact.

Dylan Bradshaw posted his footage on December 10, 2018 and within a week the video got about 2 million views. For more information on Dylan, you can visit his website at dylanbrayshaw.com. You can also see more about the Hahei Beach event in this TV news interview with the swimmer, Judie Johnson.